Powered By PV - The Welker Lab

Professor Jeff Welker, Dr. Eric Klein and their research group from the University of Alaska Anchorage partnered with Polar Field Services to power their Picarro with PV cells

Sourcing power for remote field deployment of any scientific equipment can be a challenge, but Jeff Welker’s group at the University of Alaska-Anchorage chose to rise to the challenge. As part of an Arctic Observing Network EAGER ("high risk high payoff") award from the NSF Division of Polar Programs, the research group deployed a Picarro L2130-i to a remote location at Toolik Field Station in northern Alaska (68° 38’ N, 149° 36’ W), which is in the northern foothills of the Brooks Range, about 185 km south of the Arctic Ocean, at an elevation of about 760 m (Figure 1). The team was interested in studying Arctic water cycling using water vapor isotopes (δ18O and δ2H), and also compared their data to values in Welker’s Alaska Water Isotope Network (AKWIN).  They monitored water vapor from late winter to early fall, a period in which a cyclone developed in the Arctic.  This cyclone increased both open water and surface humidity in the Arctic Ocean. For a short period during transit of this system across the Arctic Ocean, cyclonic winds carried water vapor isotope ratios associated with these conditions inland to the Toolik Lake region, which were measured in real time.  The altered isotopic values measured during the cyclone, relative to those before and after, provide new insight for both modern dynamics and past Arctic water cycle processes recorded in Greenland ice cores (Klein et al., 2015).

One interesting aspect of the Welker group’s deployment was their complete separation from line or generator power.  Instead, they powered their L2130-iwater isotope analyzer and associated peripherals from a nearby solar array.  The system itself consisted of a L2130-i with analyzer pump, Standards Delivery Module (SDM) and High Precision Vaporizer, all self-contained in a sealed enclosure designed to protect the system from the local environment (Figure 2).  Ambient air was sampled from the top of a 3.2 m high adjacent meteorological tower by pumping air to the enclosure at approximately 5 liters per second.  The L2130-i was calibrated using the SDM two times per day and they used five-minute averaged data for scientific interpretation.

The system was connected to a remote power supply designed by Tracy Dahl from Polar Field Services.  The remote power supply (Figure 3) included a solar photovoltaic (PV) and battery-based power system that was designed to take full advantage of high latitude solar cycle. A “just-in-case” generator was also installed as a back-up.  The solar array consisted of three solar facets, each with eight 140 Watt solar PV panels, in east, south, and west directions. This resulted in a total of 3.36 kW, which comfortably addressed the power needs of the analyzer and associated meteorological instruments (a typical water isotope system consumes about 300-400 Watts).  The multi-azimuth design enabled the harvesting of solar energy over the majority of the day during the summer months.  A back-up generator allowed for rapid battery charging when the solar resources were insufficient over several days of operation. Each facet was connected to an enclosure beneath the east-west panels that housed necessary power components, such as charge controllers, inverters, and batteries (Figure 3).  The remote power system operated largely autonomously, but did require minimal on-site monitoring and manual generator operation as necessary to maintain battery health.  This was designed for summer only use, but could be modified for year around operation.

The Welker lab system was deployed near Toolik in the summer of 2013 and during that time they were able to collect a continuous record of water vapor isotopes during a cyclone.  The cyclone was associated with a sharp decrease in δ-excess and disproportional enrichment in δ18O. These isotope ratios indicate a moisture source with high surface humidity oceanic water.  With similar behavior recorded in Greenland ice cores, Klein et al. (2015) used the modern data to "provide a critical processed-based explanation...of relationships previously assumed to govern water isotope ratios during sea ice retreat and increased input of northern ocean moisture into the Arctic water cycle". 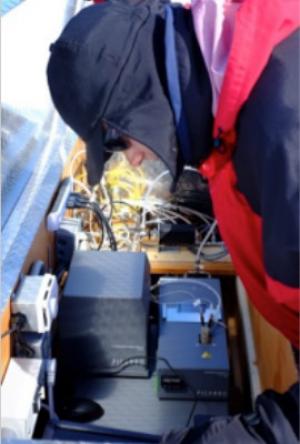