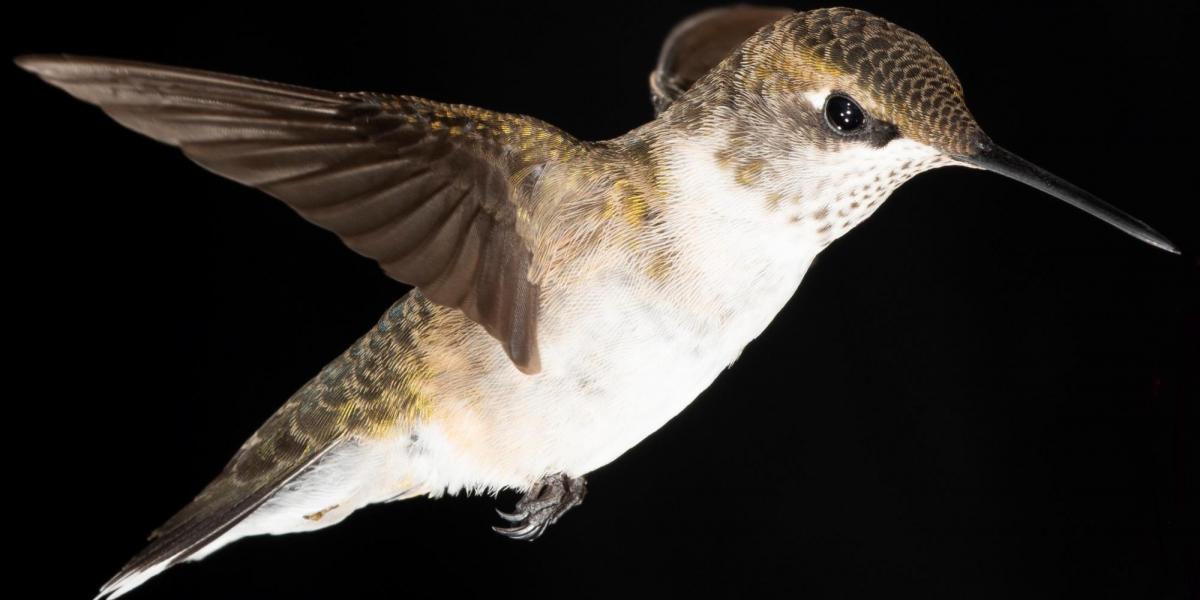 At Picarro, we enjoy seeing how research groups at the forefront of Science are using our systems in their research. We’d like to thank Erich R. Eberts, Dr. Morag F. Dick, and the entire team at the lab of Dr. Ken Welch (Department of Biological Sciences, University of Toronto Scarborough) for making this study on Metabolic Fates of evening meals in hummingbirds possible. Read on.

Anyone who has watched a hummingbird frantically sip from a flower or feeder can appreciate how beautiful, hyperactive, and hungry these tiny birds are. It often seems that they are constantly on the move, fiendishly searching for and defending the flowers that contain the sugary nectar they depend on to fuel their frenzied day-time activities. But when the sun sets, hummingbirds retreat to their nighttime roosts and suspend their feeding-frenzy for a long night’s rest.

However, just like us, hummingbirds might also snack before bed. Common observations of intense feeding behavior in wild hummingbirds during the evening suggest that hummingbirds may store sugar in their crop (a food storage organ in some bird species’ throats). By “tanking up” this “storage depot” in the evening, hummingbirds could supplement their nighttime energy supply. Hummingbirds might be able meter this meal out throughout the night and take advantage of the full energetic value of the sugar in this meal. Alternatively, they could quickly absorb this meal and convert it to fat, a more stable and energetically dense fuel. However, hummingbirds that convert the sugar to fat would lose 15% of the meal's energy during the inefficient chemical conversion between energy currencies. Either way, by filling their crop in the evening, hummingbirds could ease the major daily challenge for survival when it is too dark for them to find food.

Previous studies that aimed to evaluate the viability of the “crop-stored sugar” hypothesis measured the exchange of respiratory gasses (oxygen and carbon dioxide) in sleeping hummingbirds’ breath. By comparing the ratio of these respired gasses (respiratory exchange ratio - RER), they detected whether the birds were using primarily carbohydrates or lipids to fuel their metabolism at any given moment. The results of these studies suggested that hummingbirds can metabolize both recently acquired sugars and previously stored fats for a substantial portion of the night. However, exactly how hummingbirds use an evening sugar binge to fuel their metabolism in the nighttime is still unclear because respirometry techniques alone are not able to track and quantify the specific metabolic fate of a meal.

That is where the Picarro cavity ring-down spectrometer carbon stable isotope analyzer (Picarro G2201-i) and our team in the lab of Dr. Ken Welch at University of Toronto at Scarborough come in. In this study, ruby-throated hummingbirds (Archilochus Colubris) were fed a 13C-enriched sugar solution before they went to sleep. This enriched sugar meal, with a specific isotopic signature, would be absorbed, broken down, used for energy, and then respired as carbon dioxide, with a similar isotopic signature as the sugar meal. By evaluating both the ratio between the rate of carbon dioxide production and oxygen consumption (RER), and the 13C stable isotope signature (δ13C) of a hummingbird’s breath, we were able to estimate the amount of sugar that was directly oxidized to fuel immediate metabolic processes, versus the amount of energy in the evening meal that was converted to fat to be later broken down for energy. 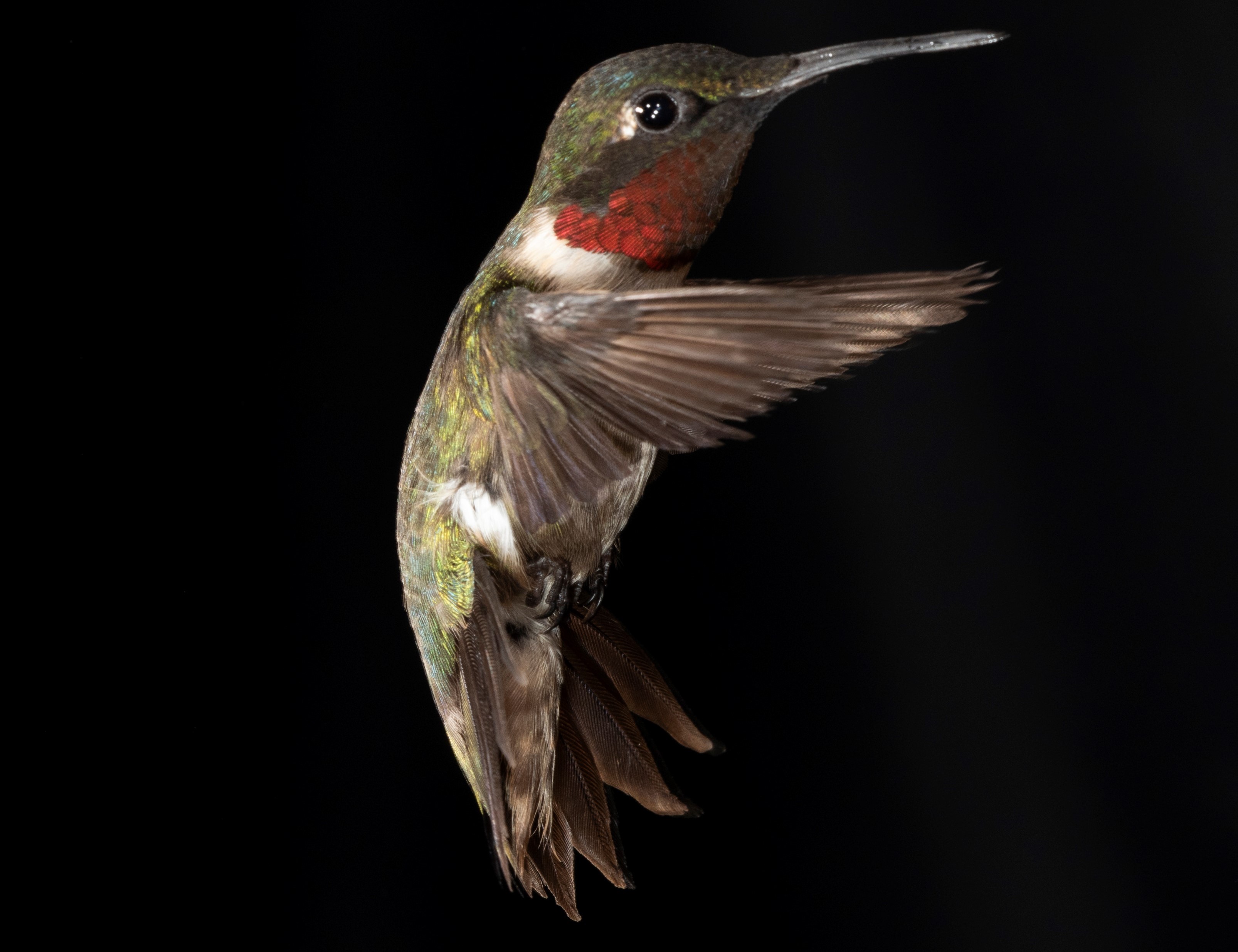 Respirometry results indicate that the hummingbirds fueled their metabolism with the sugar in the evening meal for less than 2 hours, and subsequently primarily catabolized fat stores. However, breath carbon stable isotope signatures provided the key insight that the hummingbirds converted a substantial portion of an evening meal to fat, which they later broke down to support their overnight metabolism. These results confirm that an evening nectar meal is an important factor in hummingbirds’ overnight energy budget management; however, they do not support the hypothesis that hummingbirds use the crop as a “storage depot” that could be drawn upon to provide sugar to oxidize well into the night.

The combined techniques of stable isotope analysis and respirometry have helped us understand the flexible nature of how hummingbirds survive at night, and also how they might adjust their feeding patterns to gain the maximum energetic advantage at different times through the year. For example, excessive feeding in the evening enables hummingbirds to maximize the amount of nectar in the crop at the start of fasting period, which could have beneficial effects during energetically demanding periods such as migration or breeding seasons. Additionally, our lab uses the techniques used in this study to noninvasively investigate how hummingbirds might use certain types of sugars for specific metabolic purposes. Overall, stable carbon isotope analysis has become an integral technique in studying how hummingbirds metabolize the food they consume, and how these physiological characteristics scale up to ecological patterns.

This work was recently published in a recent special issue on Stable Isotopes in Ecology of the journal Diversity (https://www.mdpi.com/1424-2818/11/1/9) 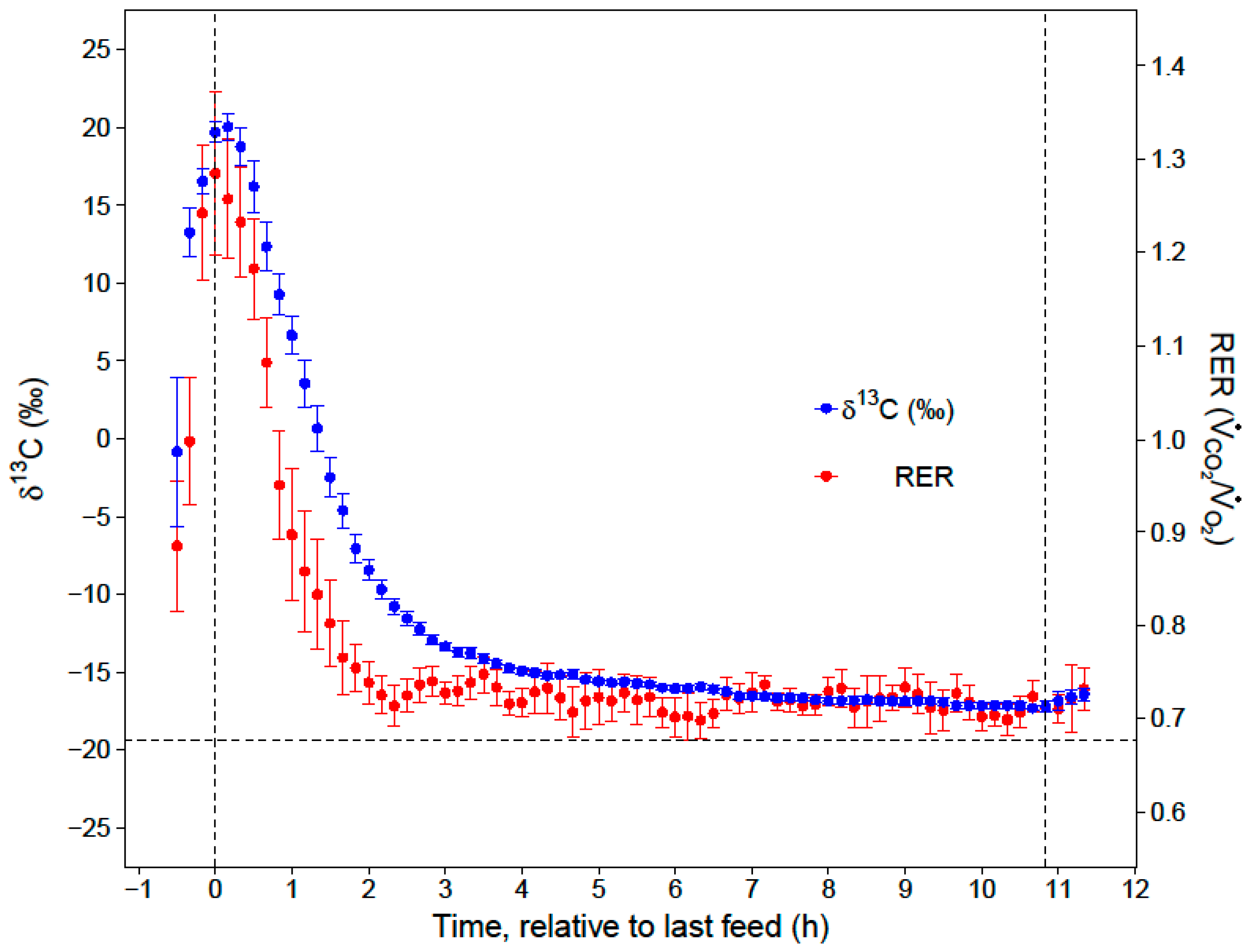 Figure 1 Overnight 13C signature (δ13C ‰; blue) and RER (red) of fed trials exhibited by ruby-throated hummingbirds, relative to the time of the last feeding (time = 0), which was, on average, 10 min prior to lights out. The horizontal dashed line indicates the average nighttime 13C signature and RER in fasted trials. Vertical dashed lines indicate time of lights off and on. Data are presented as mean ± SEM of 10-min bins averaged across the individual birds (n = 6).