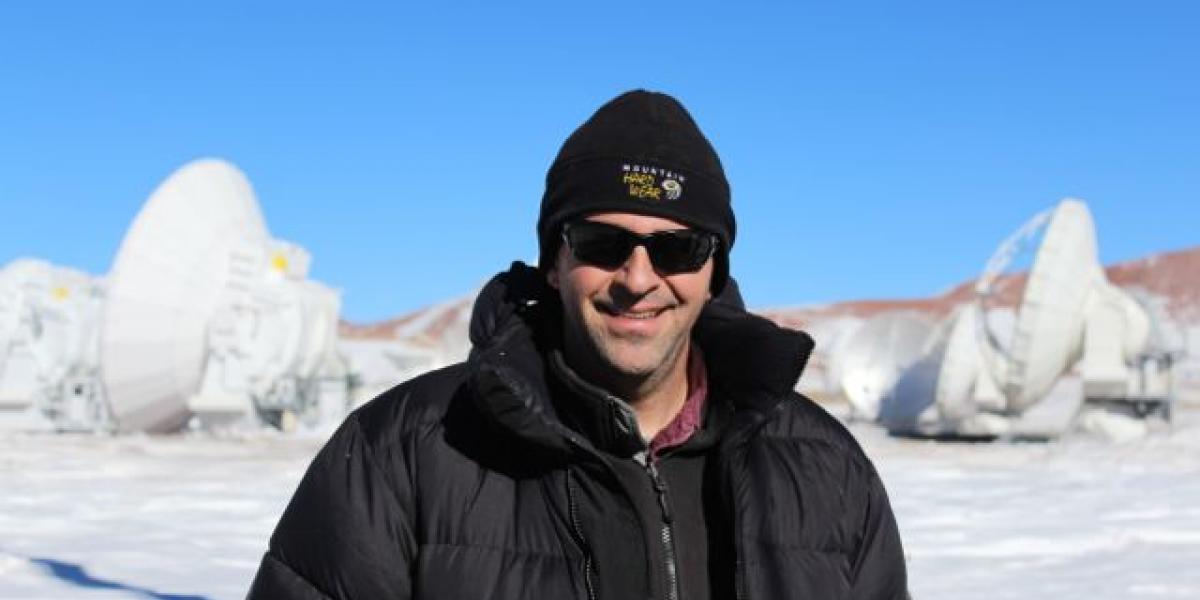 It’s been raining here in Chile’s Atacama Desert and snowing up on the nearby Chajnantor Plateau, a very rare event in this usually dry part of the world!

I am here with a group of graduate students from the Department of Earth and Planetary Sciences at the University of New Mexico and colleagues from the Department of Geology at the University of Cincinnati to perform annual maintenance on our Picarro L2130 water isotope analyzer.  In 2012, we deployed the analyzer atop the 5-km high Chajnantor Plateau, at the Atacama Large Millimeter Array (ALMA) astronomical observatory, to monitor the isotopic composition of atmospheric water vapor in the subtropical southern hemisphere. The Chajnantor Plateau is one of the driest places on Earth’s surface, with water vapor concentrations sometimes as low as 200 ppm.

The dry conditions are ideal for radio astronomy, and our NSF-funded project leverages the excellent infrastructure at ALMA to support the only project to monitor water vapor isotopic composition in the arid southern hemisphere subtropics. Climate models suggest that the water vapor concentration here may double in the coming decades, and Picarro’s technology is allowing us to probe the processes that set the aridity in this climatologically important part of the world.

It’s wonderful to do field work here - the town of San Pedro de Atacama is a center of the fascinating Atacameno culture, and we have pleasant and comfortable lodging at a guesthouse on the edge of town that is run by and for visiting astronomers. We spend our days working up in the high Andes at 5 km and can come back to a warm bed, a hot meal, and even a Pisco sour down at a comfortable altitude of 2.4 km.  Our work here has expanded from studies of modern atmospheric processes to include studies of the past climate of the region, including the history of glaciation. Currently, the region is far too dry to support glaciers, but we have uncovered proof that much of the Chajnantor Plateau was covered by an ice cap during the last Ice Age.

The path I took to get here began at Columbia University, where I was a postdoctoral research scientist.  My work at Columbia focused on the use of climate models to understand the processes that control subtropical humidity. Air parcels reaching Earth’s subtropics typically follow long, meandering trajectories since they last experience saturation in the upper troposphere, and our modeling studies showed that the temperature at which air parcels were last saturated is a primary control on the humidity of the subtropics (Galewsky et. al,  2005).

Some of my colleagues at the University of New Mexico, where I moved in 2005, were using mass spectrometry to measure atmospheric water vapor composition, a technique we used in 2006 to make the first measurements - 13 hard-won samples, obtained over a 7 day period - from the northern hemisphere subtropics on Hawaii (Galewsky et. al, 2007).  This study provided some of the first observational constraints on the role of large-scale mixing in controlling the humidity of the subtropics.

Soon after this study, I learned about Cavity Ring-Down Spectroscopy (CRDS), and in 2008 I was part of a group that used Picarro technology to make the first continuous measurements of atmospheric water vapor isotopic composition at Hawaii’s Mauna Loa Laboratory.  Within the first few minutes of operation, the Picarro analyzer collected more data on subtropical atmospheric water vapor isotopic composition than had been collected in all previous studies combined!  The sheer volume of data forced us to think about the water cycle in new ways and further clarified the roles of mixing and convection in the subtropical water cycle (Noone et. al, 2011; Hurley et. al, 2012).

After wrapping up our project in Hawaii, I turned my attention to the southern hemisphere subtropics, and my search for a site quickly led us to the mountains and deserts of northern Chile.

Also, don't forget to check out the document attached at the bottom of this blog for more photos.

Until the next blog.

Dr. Joe Galewsky is an associate professor in the Department of Earth and Planetary Sciences at the University of New Mexico. His research focuses on understanding the atmospheric branch of Earth’s hydrologic cycle, its role in global climate dynamics, and its links and feedbacks with the Earth’s surface.

Visit his group’s web site at http://www.unm.edu/~galewsky/ for more details.

Noone, D., J. Galewsky, Z.D. Sharp, et al. 2011:  Properties of air
mass mixing and humidity in the subropics from measurements of the D/H
isotope ratio of water vapor at the Mauna Loa Observatory, Journal of
Geophysical Research-Atmospheres, Vol. 116, doi:10.1029/2011JD015773