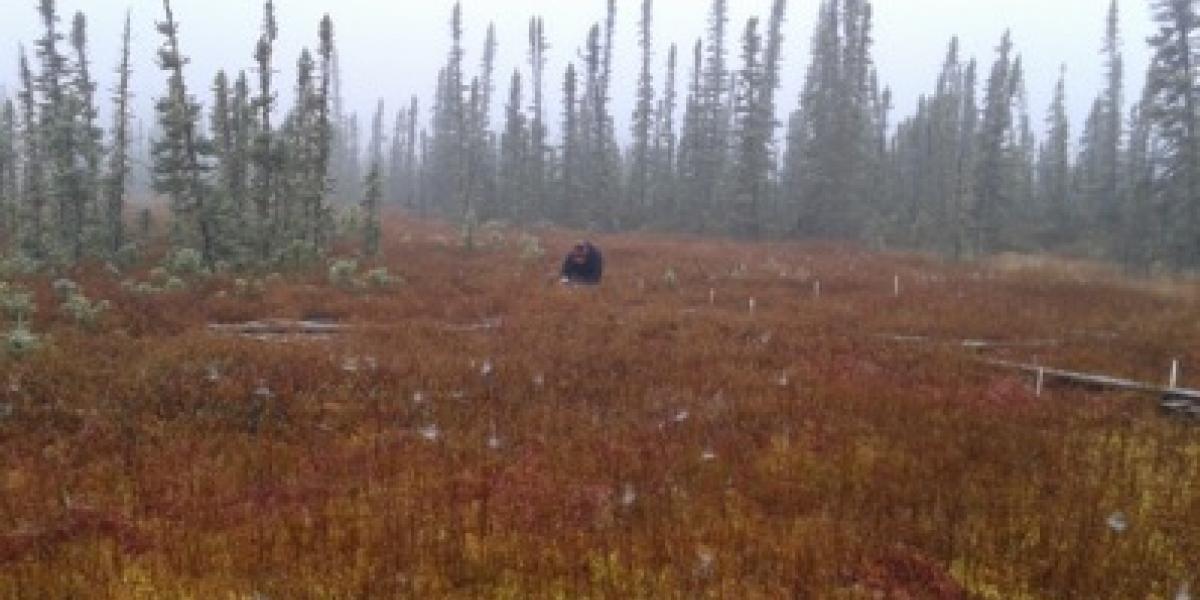 At Picarro, we enjoy hearing how research groups are using our systems in their projects. Cristian Estop-Aragonés, Liam Heffernan, and David Olefeldt with the Department of Renewable Resources at the University of Alberta, Canada have taken time to pen a description of their use of the Picarro G2201-i analyzer and Small Sample Introduction Module (SSIM) during a recent thermokarst bogs study. Thanks to all three for sharing their experience.

Accelerated rates of warming and wildfires in northern regions will result in an extensive thaw of permafrost peatlands and peat plateaus. These ecosystems represent terrestrial hot spots of soil organic carbon, and the thaw of the entire soil profile typically turns these peat plateaus into thermokarst bogs. Such bogs are characterized by ground subsidence and water-logged soils with vegetation species adapted to wet conditions temporally replacing trees (Figure 1). In these anoxic soils, microbial activity may transform organic carbon stored in peat into CO2 and CH4 resulting in the potential release of these greenhouse gases to the atmosphere. Vegetation may also release fresh carbon inputs in soil which may enhance decomposition of peat (priming effect).

To simulate the potential priming effect that these carbon inputs may have on peat decomposition, we added a substrate enriched in 13C to soils, and measured the 13C content of CO2 and CH4 in the Picarro G2201-i Analyzer using the Small Sample Introduction Module (SSIM). Once enough gas has accumulated in our laboratory incubations, we withdraw a sample from the headspace (Figure 2), mix it with zero air gas to obtain a concentration in the suitable range of the analyzer, and inject it using the SSIM. The signature of the enriched 13C substrate is clear as shown from the evolved 13C-CO2 measured (Figure 2). With these results we can then quantify, using a mass balance, the fraction of gas derived from soil carbon and from the added substrate. The SSIM measurement is quick and allows processing a large number of samples.

Figure 2: On the left, an opaque (light-free) incubation jar with a soil sample. A rubber septum and syringe needles are used to extract gas samples from the headspace and deliver it to the SSIM. On the right, 13C-CO2 values from three replicate jars where sugar was added against a control jar.

The objective is to determine if substrate addition "primes" peat decomposition. That is, if CO2 and CH4 production rates derived from soil organic carbon increase upon substrate addition. Such potential priming effects are investigated at different soil layers with different organic matter properties to better understand carbon cycling in these ecosystems. Further measurements will be performed in the next months and the final results are expected to be published in an international journal.

Picarro provides tools which support field- and laboratory-based research efforts in characterizing the behavior of greenhouse gas sources and sinks. The northern-latitude land and ocean environments represent significant areas of research and understanding the evolution of these ecosystems is key if we are to identify their role in carbon and nitrogen cycling processes.