At Picarro, we love seeing how customers and partners are implementing our systems with their own. In these three studies by Scientific Aviation and the UN, a Picarro G2301 takes to the skies of Norway, Algeria, and Romania to measure and quantify methane emissions around their respective oil and gas sectors. We'd like to thank Prof. Stephen Conley (Scientific Aviation, Inc.), the UN, and the pilots and scientists at Scientific Aviation Inc. for making this huge endeavor possible. Read on.

From the Arctic tundra to the tropics of Mexico, from Los Angeles to Long Island, Stephen Conley and the pilots and scientists at Scientific Aviation have tracked and measured air pollution throughout North America using their fleet of light aircraft. For the last ten years, Scientific Aviation has filled a need in the air quality community for readily available and lower-cost airborne research platforms, and has made a name for themselves in the United States working on projects like NASA’s ABoVE and NOAA’s ozone studies in Las Vegas and the Uintah Basin.

Global partners team up to confront methane
Methane emissions are of interest to many due to the powerful effects of atmospheric methane on global climate. Although some sources of methane emissions are well-documented, there remains significant uncertainty in the global methane budget and countless methane sources that have yet to be quantified. Of the man-made portion of recent global warming, approximately 25% can be attributed to methane emissions. According to Fred Krupp, president of the Environmental Defense Fund, emissions from the fossil energy sector is the largest global industrial source of methane. Moreover, the International Energy Agency has identified methane emissions from upstream oil and gas production as one of five key opportunities for greenhouse gas mitigation.

For these reasons, a partnership of international organizations (governmental, non-governmental, and private sector), spearheaded by UN Environment, are working together on a series of scientific studies aimed at measuring and quantifying methane emissions from the oil and gas sector. These Oil and Gas Methane Science Studies are organized and governed by the Climate & Clean Air Coalition (CCAC), the Environmental Defense Fund (EDF), the Oil and Gas Climate Initiative (OCGI), and the European Commission, and were devised in response to a call by EDF and several energy companies at the COP21 summit to better quantify the industry’s contribution to global methane emissions. As part of this directive, three new field studies have been funded to measure methane emissions in three different countries that have prolific oil and gas production: Norway, Romania, and Algeria. These three studies will occur consecutively August 2019 through March 2020, beginning in Norway. The UN has partnered with Scientific Aviation in order to complete the airborne component of these studies.

A Big Job for a Small Airplane

The airplanes that Scientific Aviation operates are single-engine propeller-driven Mooneys that have been modified for atmospheric research. Under the starboard wing protrude a series of air inlets through which air is drawn into the on-board instrumentation. Between the wings sit the pilot and the flight scientist. Space is a limited commodity on these small aircraft, so there is only room for two people; the rest of the cabin is used for science instrumentation. Weight is similarly restricted, and often a balance must be struck between instrumentation, fuel load, and crew. A Picarro G2301-f analyzer is used to measure methane, since it offers a high-quality measurement while being also relatively lightweight and compact. Along with the chemical measurement, horizontal wind speed and wind direction are also measured on-board. The combination of these measurements allows for a flux rate to be calculated from a specific source. 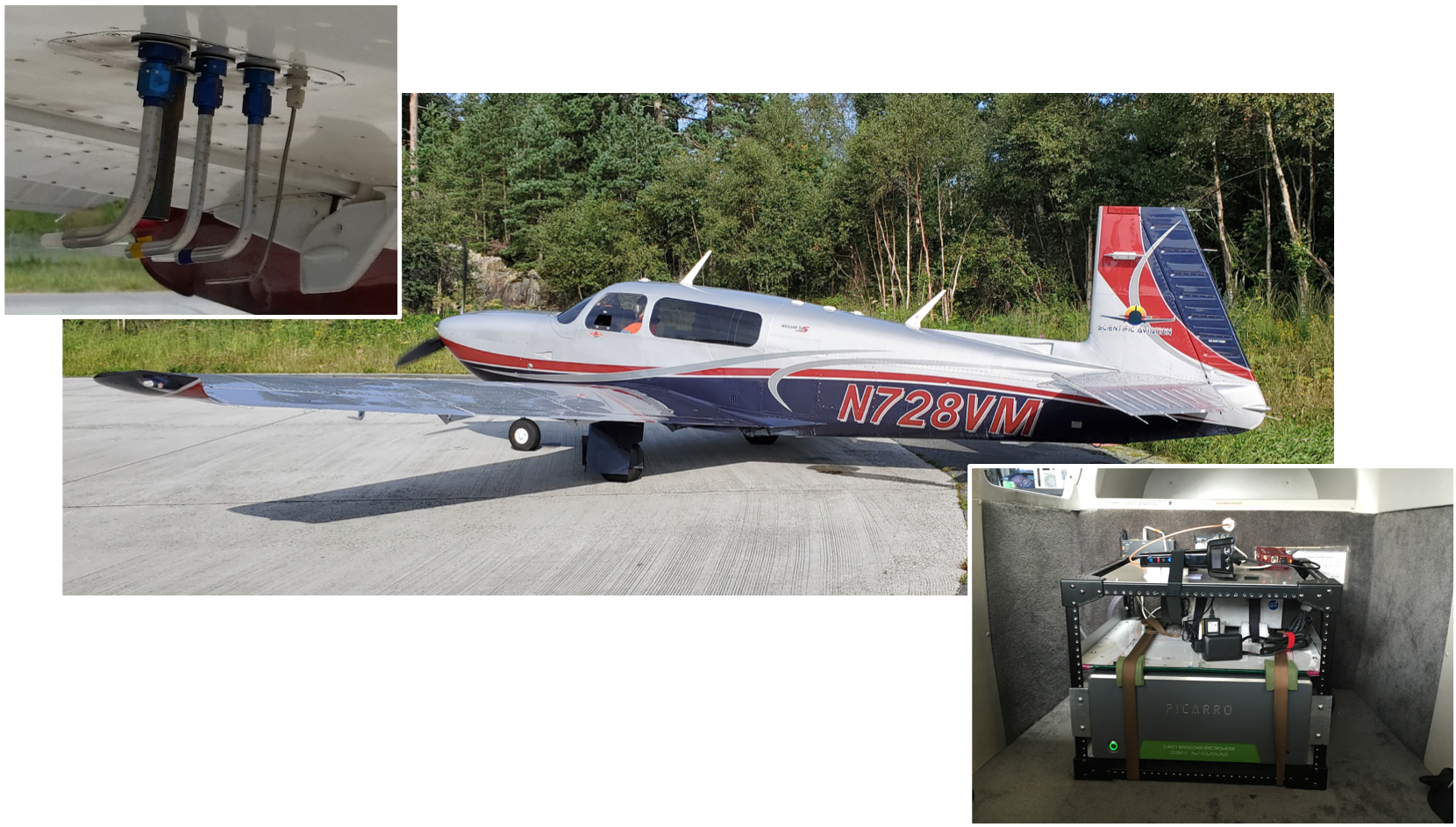 If oil and gas production is one thing that Norway, Romania, and Algeria have in common, another is that they are all located on the opposite side of the Atlantic Ocean from where the Sci Av fleet is based. For a large jet aircraft, a hop across the Atlantic is hardly a challenge, but making that same trip with a Mooney is an undertaking that is not entered into lightly. For decades, highly experienced (and highly adventurous) pilots have made the journey across the Atlantic in small airplanes, but it is not without risk. Although the probability of an engine failure is exceedingly rare (especially for well-maintained airplanes), an engine failure in a single-engine airplane could certainly make for a bad day- and that failure occurring over the water between Greenland and Iceland would definitely make it worse. This is generally enough to make most people shy away from attempting the trip. But when the CCAC and the UN leadership called on Scientific Aviation to lead the airborne methane measurements and bring one of their planes over to Europe, it was a challenge that they gladly accepted.

In Norway, petroleum takes the top spot as the country’s largest industry. The rich oil and gas deposits located within the Norwegian continental shelf, deep below the frigid waters of the North Sea, have made Norway the 8th largest producer of oil and the 3rd largest producer of natural gas in the world. Over 180 offshore rigs currently stand in the Norwegian North Sea; however, due to their relatively inaccessible location (some over 150 miles offshore), the total emissions from these facilities have never been fully measured. Over the last few weeks, Scientific Aviation worked towards filling in these data gaps by quantifying the methane emissions from a sampling of the offshore rigs in the North Sea.

Left: Refilling the Mooney upon arrival in Bergen, Norway; Right: Steve in the plane's cockpit

The use of a Picarro is absolutely instrumental in this and all of SciAv’s atmospheric analyses. Through these quantification flights, they contribute to an entirely new understanding of the global methane budget and allow for informed decision making from both a private and public perspective.