She is taking part in a $1.3 million research grant exploring the role salt marshes play in climate change and the effect that nitrogen pollution has on that role. The grant funds a project involving a number of collaborators, including Dr. Kevin Kroeger of the U.S. Geological Survey and Dr. Jianwu Tang of the Woods Hole Oceanographic Institution.

"This study offers researchers a real-world laboratory to test if excess nitrogen produces the same type and amount of greenhouse gas emissions that we have observed in shorter-term, smaller-scale experiments," says Dr. Moseman-Valtierra. If data from the three-year study bears this out, it would strengthen incentives for reducing the amount of nitrogen pollution flowing into coastal ecosystems.

Picarro was especially pleased when Dr. Moseman-Valtierra visited our Santa Clara, California facility a few weeks ago. In addition to sharing key aspects of her research with us, she joined our scientists in field testing a new five species (G2508) analyzer—in conjunction with a recirculation chamber—at marshland near the San Francisco Bay in Palo Alto, California.

According to Dr. Moseman-Valtierra, who will be using the new analyzer in her research, "The all-in-one analyzer can transform the study of greenhouse gas emissions from ecosystems. In real-time, all three major GHGs can be examined simultaneously, in situ, as needed for critical estimates of net global warming potential. And each data point—which typically takes 8 minutes to analyze on a GC—is obtained in just a few seconds with the Picarro analyzer."

Learn more about her involvement in the salt marsh collaborative study 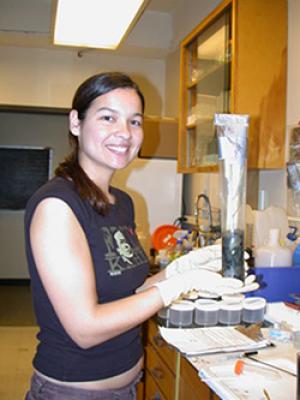