The concentration of carbon dioxide and other greenhouse gases in the atmosphere has increased year by year leading to global warming which has negatively impacted human productivity and life. Pioneering countries are making a solemn commitment to the international community to reduce greenhouse gases (GHGs) and to achieve "carbon peak" and "carbon neutrality" goals by certain dates. This “dual carbon goal” is an important starting point for the development of sustainable nations. The implementation of a dual carbon strategy relies on scientific monitoring and evaluation of GHG emissions which requires sophisticated monitoring networks that incorporate precise gas concentration analyzers.

Monitoring and Evaluating GHGs
Carbon flux can be estimated using the "top-down" (monitoring) or "bottom-up" (accounting) methods, and these two methods are complementary. The "top-down" approach usually attempts to estimate carbon sources and sinks based on changes in atmospheric observations. In contrast, the “bottom-up” approach requires investigating various local processes and building models, such as combining fossil fuel use data for each source sector with estimates of the carbon content of a certain fuel type. Because it is difficult to quantify carbon dioxide and methane from biological sources in urban ecosystems using a "bottom-up" approach, it is helpful to integrate a "top-down" approach.

Picarro Analyzers in GHG Monitoring Networks Around the World
High-precision and long-term stable measurement records are essential for the objective evaluation of reported emissions reductions at local, regional, and continental scales. The current international GHG monitoring networks can be divided into multiple levels according to the coverage area. Because of their ability to measure GHGs at parts-per-billion resolution and their robustness, Picarro analyzers are used in virtually all levels.

Global Level
The highest level is the Global Atmospheric Watch (GAW) network of the World Meteorological Organization (WMO), covering all continents of the world, with more than 80 countries participating. There are currently 30 global stations, more than 400 regional stations, and more than 100 stations by other contributing networks. The global GHG concentration data cited are mainly from the GAW network.

Central Calibration Laboratories (CCLs) operate within GAW program to provide measurement standards on the international calibration scales. Since 2009, a Picarro analyzer has been used for both CH4 and CO2 calibrations. Read about this project and how they’re using Picarro analyzers in this paper: Assessment of Recent Advances in Measurement Techniques for Atmospheric Carbon Dioxide and Methane Observations.

The Earth Networks GHG observation network plans to build 50 sites in the United States, 25 sites in Europe, and 25 sites in other parts of the world. At present, dozens of sites have been built in the United States. This network has deployed as many as 100 Picarro instruments to measure carbon dioxide and methane in the U.S. and around the world. Read about this project and how they’re using Picarro analyzers in this press release: Earth Networks, World's Largest Private Greenhouse Gas Measurement Network, is Powered by Picarro Analyzers.

1. The Global Greenhouse Gas Reference Network (GGGRN) of the National Oceanic and Atmospheric Administration (NOAA) has more than a dozen sites for in-situ monitoring of greenhouse gas. Read about this project and how they’re using Picarro analyzers in this paper: CO2, CO and CH4 measurements from the NOAA Earth System Research Laboratory’s Tall Tower Greenhouse Gas Observing Network.

2. The National Ecological Observation Network (NEON) of the National Science Foundation (NSF) network has a total of 81 field stations, including 47 land field stations and 34 freshwater water stations. Read more about this project and how they’re using Picarro analyzers in this paper: Methane Observations Across US Eco-Climates Using Existing NEON Infrastructure.

Provincial / State Level
The Northeast Corridor Monitoring Network (NEC) of the United States in cooperation with the National Institute of Standards and Technology (NIST) has 29 observation sites operated and maintained by Earth Networks that cover some large cities on the northeast coast of the United States. Read more about this project and how they’re using Picarro analyzers in this paper: Greenhouse Gas Observations from the Northeast Corridor Tower Network.

California Air Resources Board (CARB) monitoring network covers the state of California in the United States with a total of 7 sites. Read CARB’s Standard Operating Procedure for the Picarro G2401 Analyzer for CO2/CO/CH4 to learn how they’re using Picarro analyzers.

City Level
The Los Angeles Megacity project network tracks the greenhouse gas fluxes in and around Los Angeles, California, and has 14 analyzers at 13 sites. Read more about this project and how they’re using Picarro analyzers in this paper: Carbon Dioxide and Methane Measurements from the Los Angeles Megacity Carbon Project: 1. Calibration, Urban Enhancements, and Uncertainty Estimates. 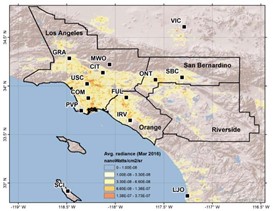 The MegaParis project covers the Paris region of France; there are a total of 5 monitoring sites. Read more about this project and how they’re using Picarro analyzers in this paper: Diurnal, Synoptic and Seasonal Variability of Atmospheric CO2 in the Paris megacity area. 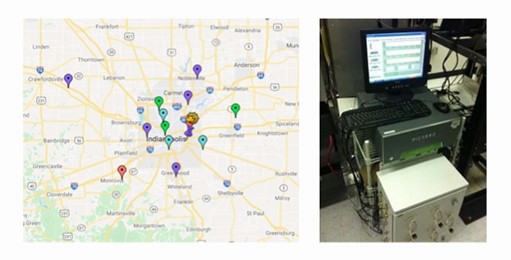 Achieve Dual Carbon Goals with Picarro
The above is a summary of relatively large-scale GHG networks around the world that are using Picarro. As a leader in high-precision gas analysis, and with extensive experience, Picarro is uniquely positioned to support international and local efforts to build monitoring networks that enable nations, states, and cities to achieve “dual carbon” goals.