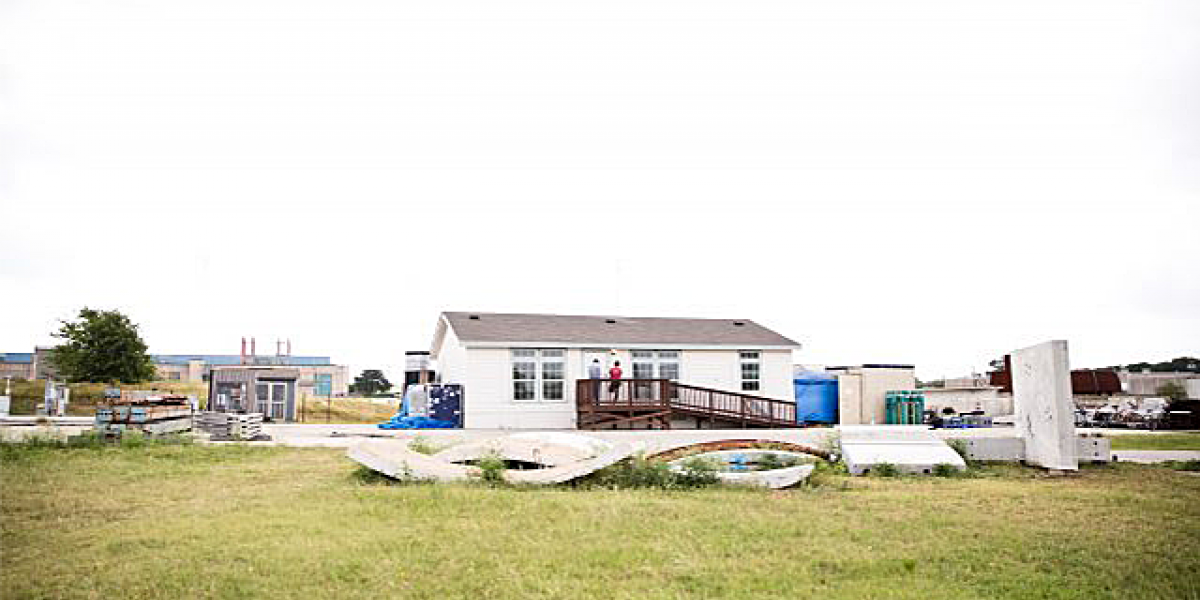 In this second part of the 2-part blog series on Real-Time Indoor Air Measurements of Ammonia, we present a short summary of House Observations of Microbial and Environmental Chemistry (HOMEChem), part of the Indoor Chem Project (https://indoorchem.org/). Here we learn how HOMEChem used a Picarro G2103 analyzer to investigate what factors influence ammonia concentrations in our homes. Enjoy!

What are the factors influencing ammonia concentrations in our homes? This is the question that the recent publication in Environmental Science & Technology “Observations and Contributions of Real-time Indoor Ammonia Concentrations During HOMEChem” tries to answer. This research involves the collaboration of different authors: Laura Ampollini, Erin Katz, Michael Waring and Peter F. DeCarlo from the department of Civil, Architectural, and Environmental Engineering, and the department of Chemistry at Drexel University, Yilin Tian and Allen Goldstein from the department of Civil and Environmental Engineering, and the department of Environmental Science, Policy, and Management, at the University of California, Stephen Bourne and Atila Novoselac from the department of Civil, Architectural, and Environmental Engineering at the University of Texas at Austin and Gregor Lucic from Picarro Inc. Ammonia, NH3, is one of several pollutants investigated during the HOMEChem experiment, where many activities, such as cooking, cleaning and human occupancy, were performed to better understand how what we do in our homes affects what we breathe. Ammonia is commonly emitted indoors by cleaning products, building materials, tobacco smoke, cooking activities, and humans (through exhaled breath and sweat). This chemical is found outdoors at typical concentrations of 1-5 ppb and plays a major role in the neutralization of acidic gases emitted by human activities and in the formation of secondary inorganic aerosols. These reactions, however, happen indoors as well, and this is why it is so important to better understand the sources and influences of indoor ammonia concentrations.

According to the US EPA, people spend roughly 90% of their time indoors and this is reason enough for in-depth study of indoor chemistry - precisely why HOMEChem is so important!

Previous studies investigating indoor ammonia concentration in homes, schools and offices were often conducted using diffusive samplers or active samplers with denuders, leading to the need for improved accuracy and high time resolution ammonia measurements. This study represents the first use of a Picarro G2103 Analyzer, using the CRDS (Cavity Ring-Down Spectroscopy) analytical method, in an indoor space. This instrument provides real-time measurement of ammonia in parts per billion (ppb). The instrument was placed above the refrigerator in the kitchen of the UTest House at a height of approximately two meters and a distance of approximately four meters from the stove and oven. With the instrument connected, our experiment came to life as we saw the live ammonia enhancements in real-time during the different activities in the UTest House!

The data collected with the Picarro Analyzer were analyzed using Igor Pro 7. Ammonia was analyzed and compared with the temperature and relative humidity of ambient and supply air, CO2, human activities (windows and doors open/close, number of people in the house, and activity performed.

The mean background ammonia concentration when no experiments were performed and no people were in the house was found to be 31.9 ppb when the AC was set at 25.5°C and 67.8 ppb when the AC was set at 32.2°C. The mean concentration doubled with an increase in mean temperature of 7.6°C. The trend of ammonia followed the trend of the ambient temperature in absence of primary sources. Ammonia was also cycling with the HVAC system, decreasing when the AC was on and increasing when the AC was off. This behavior was in line with the results of Duncan et al. 2019 that investigates the cyclic uptake of water- soluble species in the water available in the cooling coil. 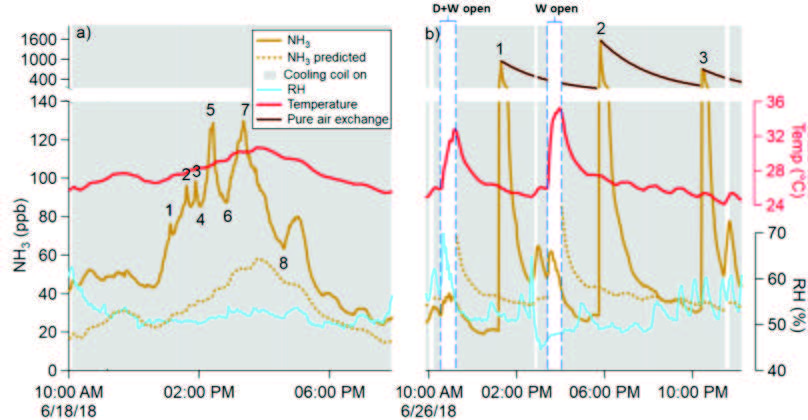 NH3 concentration, NH3 predicted, temperature, relative humidity and cooling coil on/off during the cooking activity (Thanksgiving dinner) and the cleaning activity (combination of mopping the floor with vinegar and spraying ammonia on surfaces). Graph A) 1,2,3: Open oven to baste turkey; 4: Begin frying turkey on stove; 5: Turkey out of oven; 6: Pancetta into oven; 7: Pancetta out of oven; 8: Start Cleanup; Graph B) 1,3: NH3 spray starts (after mopping); 2: NH3 spray starts (before mopping). Time intervals when door/windows and windows were opened are indicated with “D+W open” and “W open”. NH3 decay due to pure air exchange loss is shown in graph B. (Ampollini et al., 2019)

The last activity that was analyzed in this study is the Open House day where 3 tours of between 15-25 people visited the UTest House to learn more about the HOMEChem experiment. During this “Occupancy activity”, ammonia reached a maximum of 99 ppb, which is 3 times higher than the mean background concentration. This is an important result that underlines how important it is to be able to quantify human emissions, especially in crowded indoor places.