At Picarro, it's very rewarding to know that our customers' research directly impacts the world's understanding of climate. We would like to thank the Climate and Environmental Physics Division at the University of Bern and Dr. Stéphane Affolter et al. for their recent study on fluid inclusion in stalagmites. Using a Picarro L2140-i, they were able to address the Holocene temperature conundrum, an important issue in the paleoclimate community. Read on.

The hydrogen and oxygen isotopic composition of rainfall is influenced by a variety of climatic factors such as air temperature, amount and origin of precipitation. Having an archive that allows us to obtain direct measurements of changes in the isotopic composition of rainfall in the recent and distant past would help us to reduce current uncertainties in our reconstructions and also allow to benchmark climate model simulations more effectively. To date, ice cores from Greenland and Antarctica are the only archive that can record annual to decadal-scale changes in the isotopic composition of snowfall over several hundred thousand years. Speleothems (e.g., stalagmites, stalactites and flowstones) found in caves around the world are a natural archive of palaeorainfall as they are formed by groundwater and rainfall respectively. Speleothems contain very small amounts of water which is trapped in so-called fluid inclusions within and between the calcite crystals, similar to gas bubbles in ice cores.  How is water entrapped in calcite? Precipitation water above the cave area infiltrates into the soil and epikarst and will transit through (micro-) cracks to finally drip from a soda straw hanging from the roof of the cave onto a stalagmite. This water that contributes to the stalagmite growth will also be entrapped as fluid inclusions.

It is challenging to discover direct and unaltered water issued from past precipitation in continental areas and Milandre Cave in Switzerland, as well as many other caves worldwide, is able to provide stalagmites that contain fossil water preserved for millennia in a natural environment. Our research, recently published in Science Advances, confirms that speleothem fluid inclusions seem to be a very promising tool for the paleoclimate research (Affolter et al., 2019).

Fluid inclusion studies in stalagmites were initiated in the mid-seventies (Schwarcz et al., 1976), but methodological and analytical challenges made it very difficult to measure hydrogen and oxygen isotopes in fluid inclusions simultaneously. Furthermore, existing methods were also time consuming and therefore did not allow developing continuous and highly-resolved isotope records.

At the Climate and Environmental Physics Division of the University of Bern, we developed a new method to extract microliter amounts of water from stalagmites and further analyse their water isotopes (Affolter et al., 2014). The inclusion water can be extracted through the crushing of a ~ 1 gram calcite sample where the released water (~0.5 – 5 microliters) is directly flushed with dry nitrogen to a Picarro analyser L2140-i WS-CRDS instrument for a direct determination of the water isotopes, without prior treatment of the water molecules (Affolter et al., 2014). 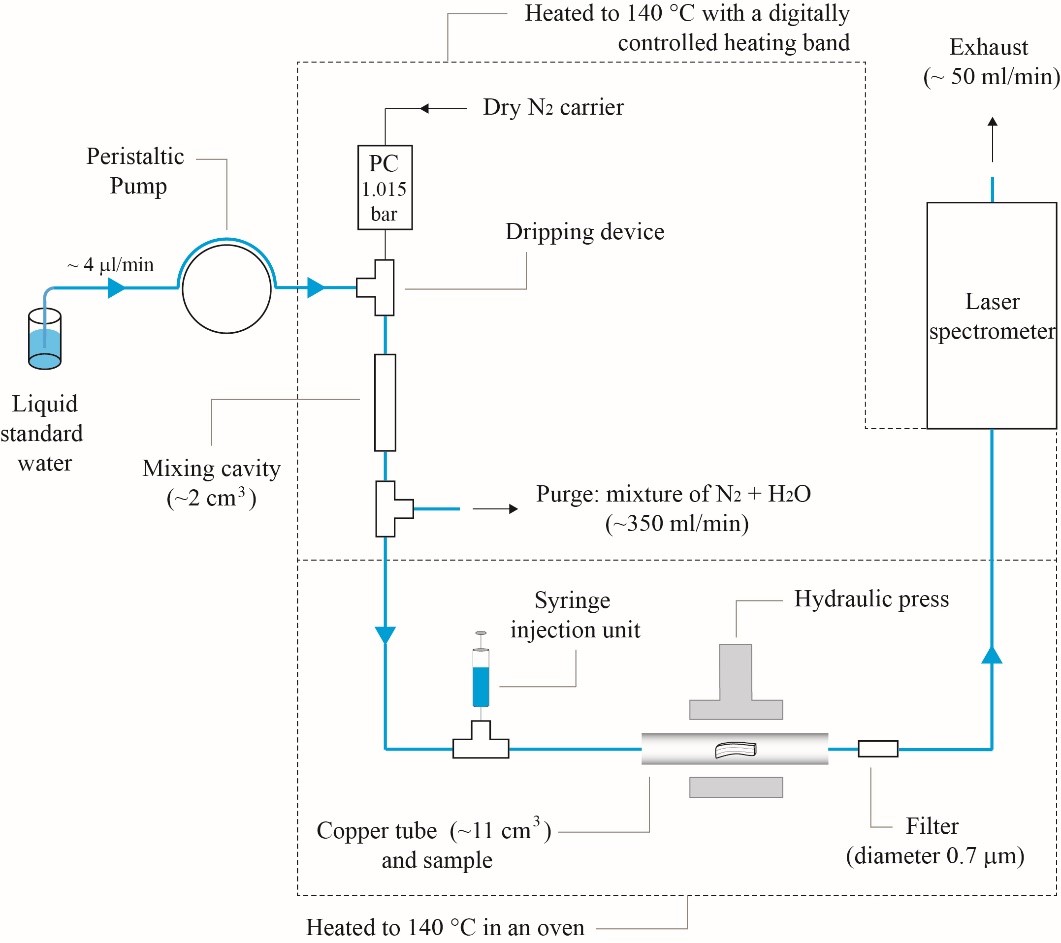 Measuring line developed at the University of Bern. After the stalagmite sample crushing, the released water is directly flushed to a Picarro analyser (Affolter al., 2014).

We applied this new method on two stalagmites M6 and M8 from Milandre Cave located in the Jura Mountains in north-western Switzerland. Beforehand, we proceed to a thorough water isotope monitoring of the local precipitation and cave drip waters to understand the significance of the water isotopes eventually found in the speleothem fluid inclusions (Affolter et al., 2015). Due to physically constrained processes, the water isotopes in modern precipitation at the study site are highly correlated to the temperatures. This allows us to transpose this relationship into the past and estimate the past temperature variability of central Europe over the past 14000 years (Affolter et al., 2019), including the Younger Dryas and the Holocene, the latter is considered as the closest geological epoch with similar climate state as today. 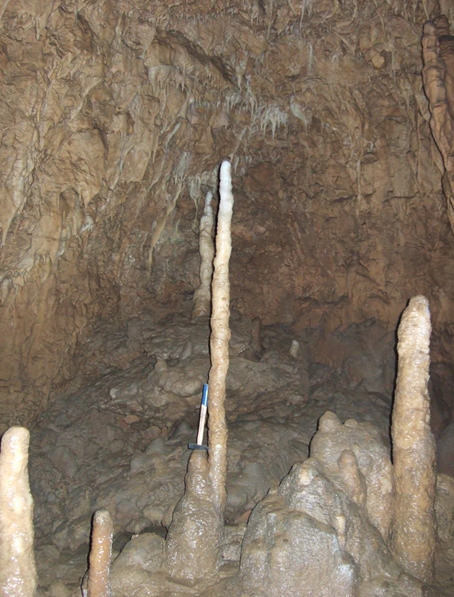 Stalagmites M6 (right) and M8 (left) collected in the “Galerie des Fistuleuses”. After sampling, their respective lengths were 0.3 metres and 1.4 metres.

Our results show that the water isotopes determined from microliter amounts of water stored in Milandre Cave stalagmites for millennia (Affolter et al., 2019) have a very similar pattern as the Greenland ice core water isotopes, which indicates a connection between past climate variability in high and low latitudes. The inferred temperature reconstruction that is relevant for central Europe shows a very similar behaviour in the temperature evolution as the Greenland and the western Mediterranean Sea areas and suggests the occurrence of a Holocene Thermal maximum between approximately 10000 to 6000 years ago with temperatures warmer than pre-industrial values. It is also remarkable to observe the pronounced temperature drop at the beginning of the Little Ice Age – a well-known cold period in Europe – occurring approximately 700 years ago.

Despite being extensively studied, the details about the Holocene temperature evolution in the northern hemisphere are still not yet fully understood and require additional tools but also a critical discussion of existing information. In that sense, our study has to be placed in the context of several other publications attempting to reconstruct temperature for the Holocene period. The long-term trend evolution of the temperature variability in central Europe confirms a marked gradient in temperature between mid and high latitude in Europe in the first part of the Holocene, possibly due to the influence of the remaining ice sheets on high latitude records, for which a discussion of a global temperature reconstruction is difficult. We also observed that independent of summer, winter or mean annual temperatures based reconstructions; a long-term cooling trend is mostly visible in several proxies.

Our reconstruction allows us to address the so-called Holocene temperature conundrum (Liu et al., 2014) that is an important issue in the paleoclimate community. The conundrum is a discrepancy between paleoclimate data showing a long-term cooling since the mid Holocene while climate models simulate a warming. Several reasons have been proposed to explain this conundrum, among which seasonal biases in the proxies. Most proxies (chironomids, pollens, marine records, etc.) representing summer temperature show a cooling. Therefore, it was suggested that the occurrence of pronounced harsh winters in the early Holocene may compensate for the offset with climate models. Our results that correspond to mean annual temperature potentially biased towards the cold season suggest that the seasonality in the proxy is not the main cause of the conundrum. Hence, the discussion remains open. 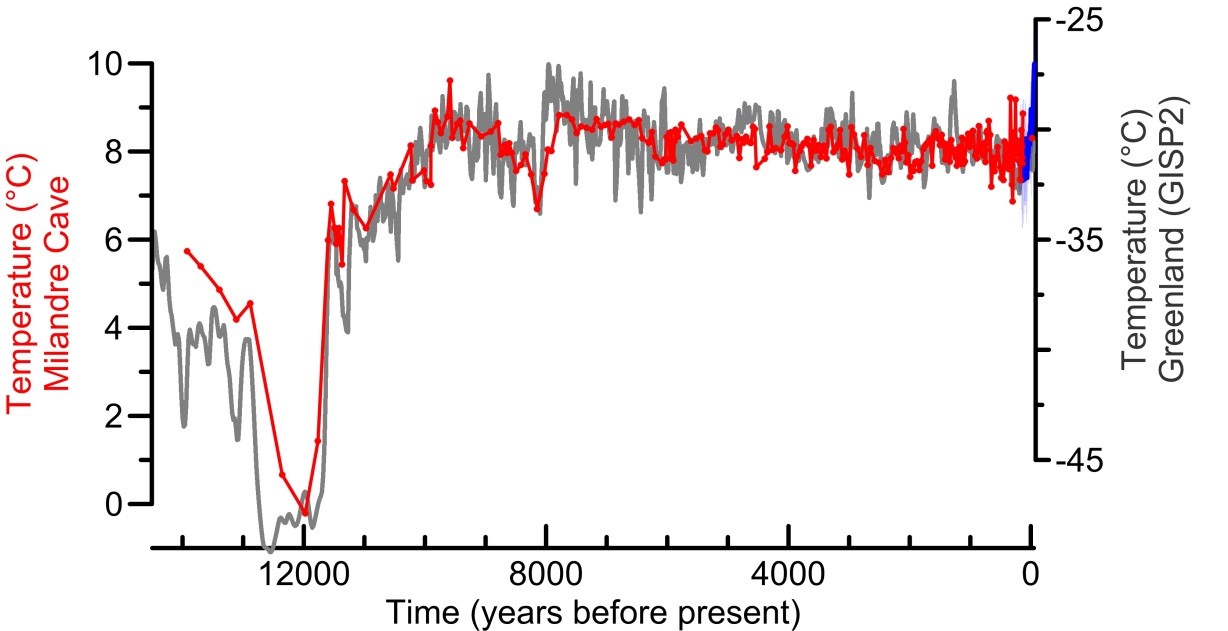