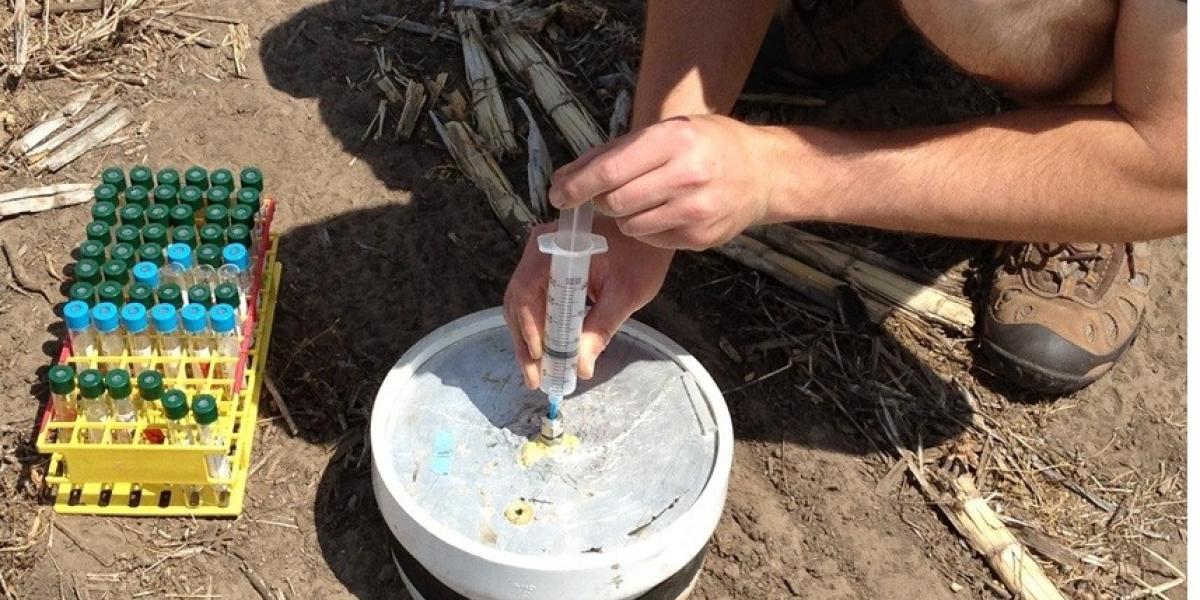 Traditional vial-and-syringe-type measurements of closed chamber trace gas fluxes have provided researchers with massive amounts of insight into ecosystems ranging from old growth forests to heavily managed agricultural fields. However, anyone who has ever collected these types of gas samples knows that you can easily compromise your carefully collected samples in the blink of an eye, or with a trip down the stairs.

Even if you’re careful, and get your vials back to the lab in one piece, data can still be lost during extraction and analysis. In a recent paper, Christiansen et al. (2015) compare trace gas (CO2, CH4, and N2O) fluxes measured using a traditional vial-based chamber method to those measured in-situ using a laser-based analyzer (Picarro G2508 Cavity Ring-Down Spectroscopy (CRDS)). While the authors note that the qualitative results of the study (i.e. treatment effects) remained consistent between both methods, they report an incredible 4x higher methane flux sample recovery rate when using the laser-based system as compared to the Gas Chromatograph (GC) and vial method.

"Overall there was a much smaller recovery of CH4 fluxes measured with both techniques compared to CO2 and N2O. For GC, eight out of 49 fluxes were significant compared to 32 out of 49 for CRDS, corresponding to a detection level of 16% and 65% of all CH4 fluxes for GC and CRDS, respectively."

The authors attribute this increased recovery rate of methane flux estimates to two causes. First, the sensitivity of the GC to sub-ambient methane concentrations (<2 ppm CH4, indicating methane uptake in the soil chamber) was poor due to sampling handling and processing errors in both the field and laboratory. In contrast, the in-situ measurements made using the CRDS analyzer are not subject to these sample handling issues. Secondly, and perhaps more important, was the significantly increased temporal resolution of chamber concentration time series measurements using the laser-based analyzer. The data-density created by the rapid laser-based sampling allowed for detection of statistically significant but very small negative fluxes of methane that went undetected by the GC method.

These results led the authors to develop a metric called Minimum Detectable Flux (MDF) and to further discuss the significantly decreased MDF values that can be achieved using high-density data from laser-based analyzers. In the next couple of blog articles, we’ll talk about how the MDF works, and how to extend it to your studies.

Check out Part 2: An Introduction…