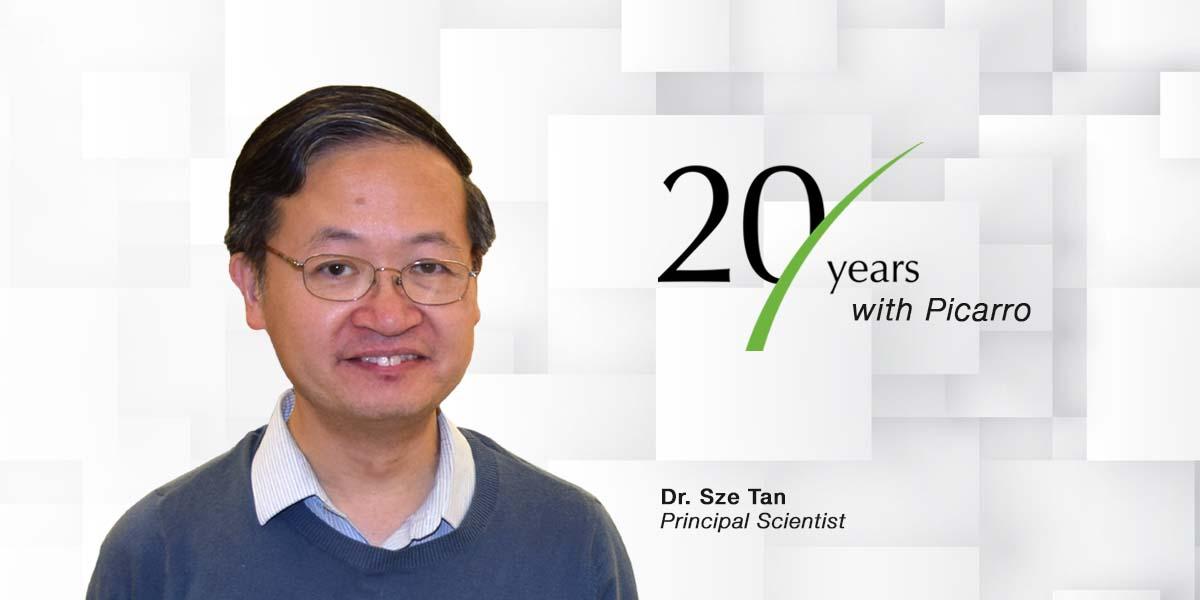 To a lay person, a sabbatical is thought of as an extended vacation spent traveling to exotic locations, and generally, not working. Not so for Dr. Sze Tan, Picarro’s Principal Scientist and Research Fellow. Twenty years ago, he took a sabbatical from his job as a physics professor at the University of Auckland to spend six months working at what is now Picarro. His goal was to help figure out how to manufacture a tunable laser. Experimental observations showed that a design based on an acousto-optic tunable filter would work, but it was not clear why. Dr. Tan was able to develop a numerical simulation of the physics of the device which provided a model for its operation and closely reflected the experimental observations. He enjoyed the combination of theoretical and experimental work and their application to practical problems so much he decided to join the company.

Tan earned a Ph.D. in Physics from the University of Cambridge, holds 39 patents, and has published more than 100 papers. Now, as a Principal Scientist and Research Fellow at Picarro, Dr. Tan assesses, develops, and implements the technologies that enable Picarro analyzers to make the high-quality measurements required by many applications in science and industry. He has designed versatility into Picarro’s hardware and software platform, enabling it to be configured to address measuring and monitoring applications involving greenhouse gases, isotopic water, semiconductor fabrication processes, natural gas emissions, and more.

How a Visit to a Landfill Launched a New Business for Picarro
About twelve years ago, Dr. Tan was traveling quite extensively for the company, visiting several landfills around the country to determine how to use Picarro analyzers to quantify the methane emissions. Landfills were selected because they are known to emit more than 15% of all the anthropogenic methane in the U.S. After some research, the team found that measurements using a tracer dilution method could work to quantify the emissions. This method involves releasing a controlled amount of a tracer gas such as acetylene from a central location in the landfill while driving a mobile analyzer that simultaneously measures both methane and acetylene through the plume of gas at some distance downwind of the source. This approach uses the dynamics of the atmosphere to aggregate the emissions, and by measuring the ratio of the concentrations of the two gasses, it is possible to calculate the unknown amount of methane produced by the landfill in terms of the known amount of acetylene released.

“To make this work, we had to design and build a fast dual species analyzer which could be mounted in a vehicle, and which could use a GPS receiver to allow the concentrations to be plotted as a function of position,” explained Sze.

On a particular visit to the Yolo landfill near Sacramento, Dr. Tan decided to keep the analyzer turned on and recording data during the drive back to the Bay Area. After analyzing the data collected on that drive home, the team discovered several large spikes of methane concentrations which could be plotted against the GPS position as shown in the lower left picture. Some of these were close to waste-water treatment plants but there were others which were due to natural gas leaks from distribution pipelines. The data collected on that day was the origin of Picarro’s natural gas Advanced Leak Detection (ALD) system and the Gas Business Unit. 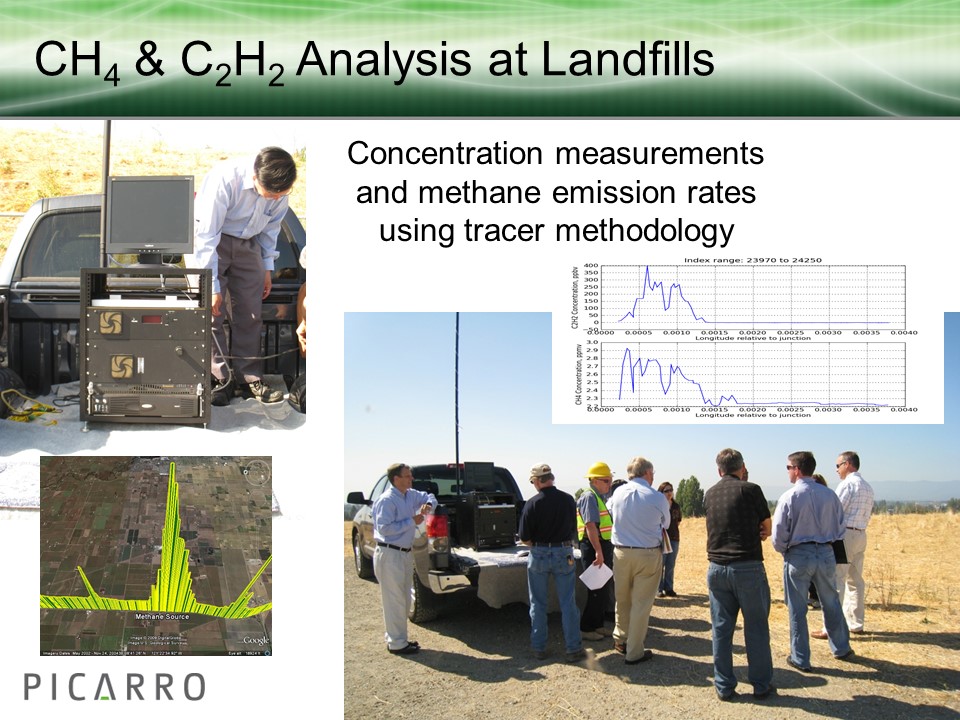 Figuring out how to apply Picarro’s technology for the rapid detection and location of natural gas leaks from a moving vehicle, as opposed to walking a handheld device over gas transmission and distribution lines, is one of Dr. Tan’s favorite projects. This project brought together several important developments – the ability to make spectroscopic measurements quickly enough to resolve concentration changes in a fraction of a second, the integration of data from a spectrometer with GPS and anemometer data, and the development of algorithms which allow for localization and quantification of leaks.

“Besides the important safety and environmental benefits of the technology, this project taught us how the combination of data processing and statistical analysis with high quality measurements can increase the value of the data to an extent we had not fully appreciated previously,” Dr. Tan said.

By pushing the limits of existing technologies, discovering new ways to make use of the data that Picarro analyzers can provide and identifying new applications, Dr. Tan has been instrumental in helping Picarro expand into new markets. We look forward to seeing where he takes us next. 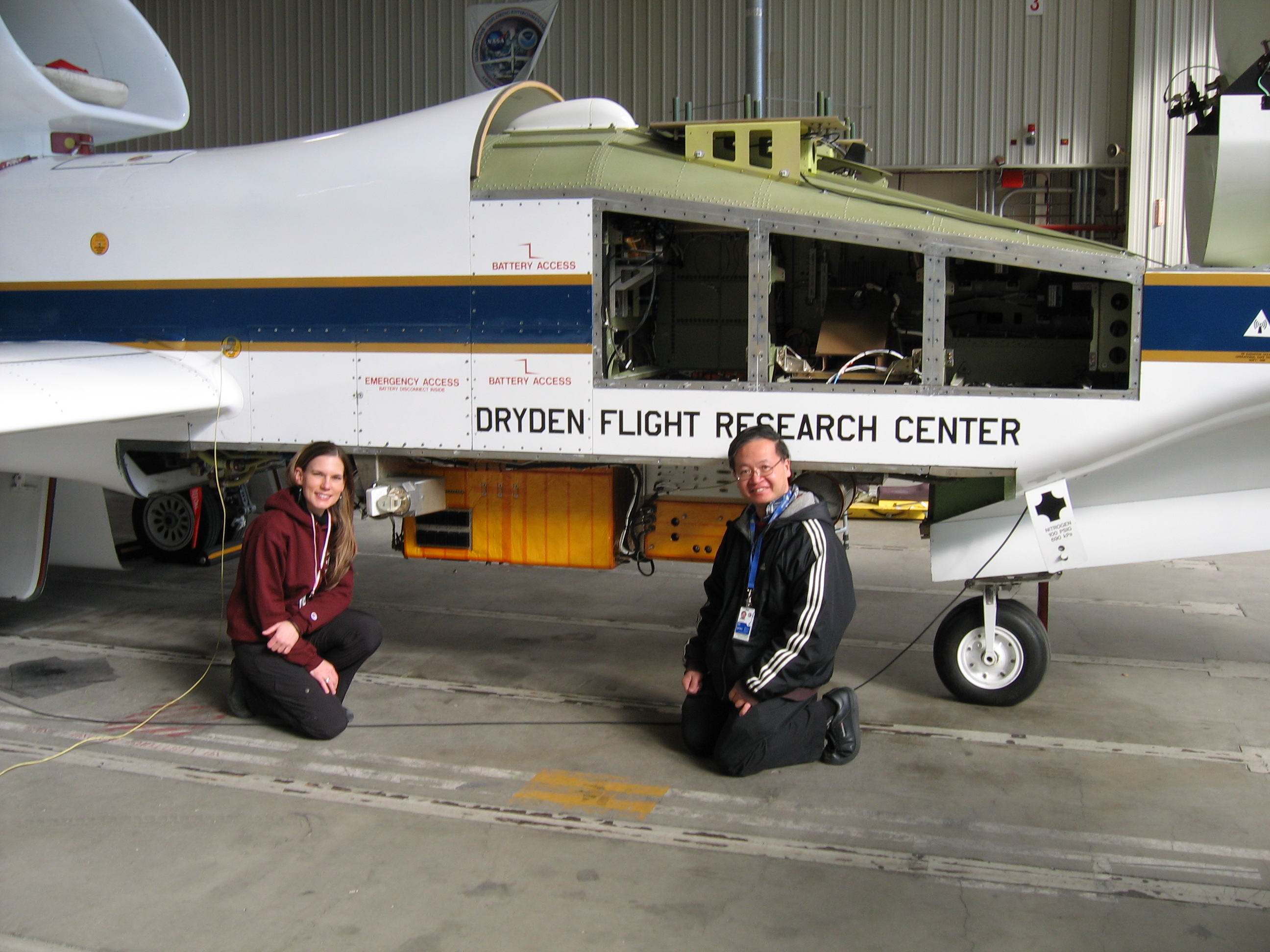 Dr. Tan with Dr Jasna Pittman from Harvard University at Edwards Air Force Base in 2013. The Global Hawk remotely piloted drone behind them flew with a modified Picarro analyzer to measure gases in the upper atmosphere.