A trip to Paris is never a bad thing...

A trip to Paris is never a bad thing, especially when the excuse is a gathering of about 50 of the top atmospheric scientists from around the world who are using water vapor isotopes. Last week, scientists from Laboratoire des Sciences du Climat et l'Environnement (LSCE) hosted an intimate workshop on “Advances In Observations, Models And Measurement Techniques Of Atmospheric Water Vapor Isotopes” at the Centre National de la Recherche Scientifique (CNRS) in Gif-sur-Yvette. As a member of the Picarro team who facilitates atmospheric water vapor measurements, and as a scientist myself, I was invited to attend.

The workshop was a great success and we heard from a number of excellent scientists. The line-up included scientists who are at the fore-front of making in-situ atmospheric water vapor measurement using Picarro Cavity Ring-Down Spectroscopy (CRDS) analyzers, including Dr. Harald Sodemann and Prof. David Noone, along with scientists making soil-flux and tower measurements such as Prof. Christiane Werner and Dr. Max Berkelhammer. In addition, there was a strong presence of climate modelers who are working hard to incorporate water isotopes from in-situ measurements using Picarro CRDS analyzers and other techniques, such as satellite HDO data, into General Circulation Models (GCMs) for the purpose of better understanding the global hydrological cycle, evaporation, entrainment and cloud convection. 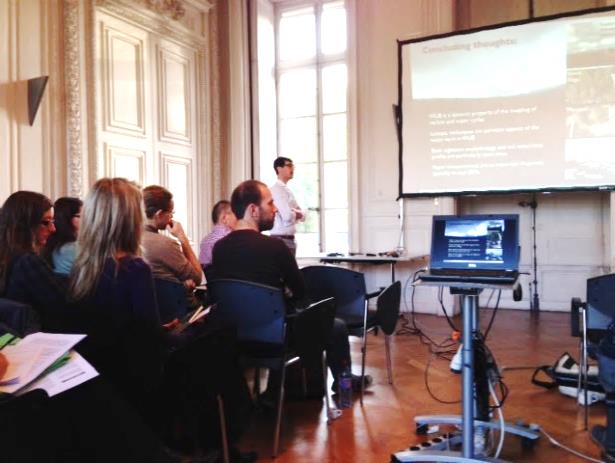 One of the themes throughout the workshop was the fundamental ground-shift in measurement techniques that has led to a scientific paradigm shift in existing theories and new hypotheses. In particular, how the advent of laser techniques such as CRDS, and specifically Picarro’s isotopic water analyzers, have made in-situ, real-time atmospheric water vapor measurements a reality. I presented a talk about using CRDS for high-precision triple oxygen isotope measurements in water and water vapor, which is attached below or available for download here. My talk opened with a discussion on applications of triple-oxygen isotope measurements to the atmospheric sciences community. I briefly reviewed previous work demonstrating how 17O-excess (the deviation from the global meteoric water line in a plot of δ'18O versus δ'17O) in marine water vapor is dependent on humidity, and therefore how process-scale studies could help with the interpretation of paleoclimate data from ice cores, among other things. My talk then focused on the technological improvements we’ve made at Picarro, with help from our collaborators at the University of Washington and INSTAAR (University of Colorado-Boulder). These technological improvements now enable high-precision 17O-excess measurements on the new Picarro L2140-i that are competitive with conventional Isotope Ratio Mass Spectrometry measurement techniques, but with the added advantage of higher throughput, decreased hands-on time and the ability to easily measure ambient water vapor. I encourage you to review my slides if you are interested in learning more about the new L2140-i, its performance, and its ability to change the way atmospheric, climate and Earth scientists make triple-oxygen isotope measurements in water.

No workshop would be complete without good food and even better conversation. This workshop had the added benefit of a French chateau, not to mention the French cheese and wine. The organizers Hans-Christian Steen-Larson, Valérie Masson-Delmotte and Helene Brogniez said "It was our goal right from the start of the planning phase of this workshop that we wanted to bring the community together and facilitate scientific discussions to move the science forward. During the workshop we experienced great spirit and enthusiasm. There was especially the underlying sense of being one community working together to solve the scientific questions."

I also used the workshop as an opportunity to visit with a few of our Picarro users at LSCE. LSCE is a power-house in water isotope measurements, and they have Picarro isotopic water vapor instruments housed all over the world – in sheds in south Greenland, in the high Altiplano in Bolivia, in Bermuda, and of course, right outside Paris at LSCE itself. I was particularly interested in the analyzers that have stayed in France, including a new L2140-i which arrived while I was there. Good luck to the LSCE team, and I look forward to hearing about your exciting new 17O-excess science!

Au revoir, Paris. It was a pleasure.

Update -- January 2014:  A review of the workshop is now available online, including PDFs of the talks.